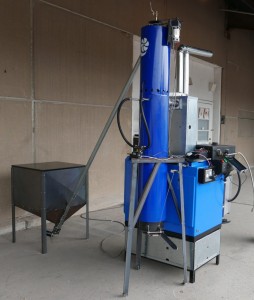 A Combined Heat and Power Stirling Engine Generator made by Combined Energy Technology.

Stirling engine generators have not yet become a commodity item. So getting one that would be right for you is often difficult.

There are some engines that are available as complete, ready-to-use products today. Most of these are set up to produce both heat and electricity at a high combined efficiency level.

Summary of This Article

This article will tell you what you need to know about buying a Stirling engine generator, from the cost to the different types available.

Click on any of these links to jump to a section:

What You Should Know 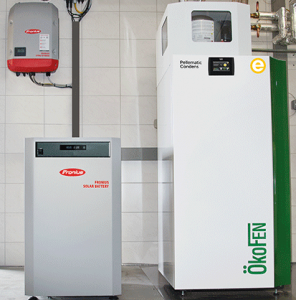 A combined Heat and Power engine in the home, manufactured by Ökofen¹.

The first thing you should know is that you shouldn’t waste your time trying to buy one at your local construction supply store because they won’t have one.

A quick search for Stirling engine generators on Google turns up some steam engines and some engines with the “Sterling” brand that are not “Stirling” cycle engines.

You are paying for more of the engineering time with a design that has never been built in high volume.

This is true for gasoline engines as well as Stirling engines.

Gasoline and diesel generators have been manufactured by the millions and had generations of engineers figure out how to reduce the costs.

So, when you do find a Stirling engine generator, you shouldn’t expect it to be as cheap as a comparable gasoline or diesel generator.

Can I Save Money by Making One? 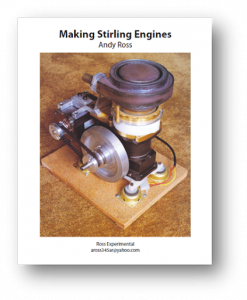 The short answer is: yes, in theory, you could.

There are a lot of home machine shops and small machine shops with enough capability to make a small Stirling engine that produces some power.

The big difficulty in building a good do-it-yourself Stirling engine is finding a suitable design that is likely to work well on the first try.

I highly suggest that you do not consider building a Stirling engine as a totally new design on your first attempt.

The design rules for making a good Stirling engine are never obvious to people trying to build their first one, but later in this article, I’ll give you some suggestions for building a Stirling engine that’s likely to work the very first time.

If you follow the design rules that work well for internal combustion engines, your engine will run poorly or not at all.

The Problem of Efficiency 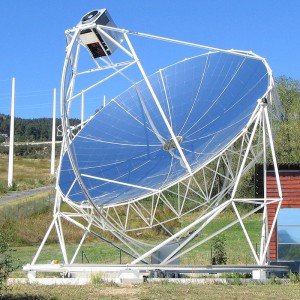 People who have studied Stirling engines know they can be some of the most efficient engines in the world. Indeed that is true.

So, what’s wrong with that?

Well, nothing is wrong with it except anytime that one design constraint like thermodynamic efficiency, becomes the main design goal of an engineering program, other important things – like the final price and ease of manufacturing – will suffer.

What Happens When You Demand Efficiency

But then, that engine will have to compete in the marketplace with gasoline and diesel engines that have been priced reduced over many, many generations.

If you asked the same engines to strive for a balance of efficiency, and ease of manufacture and a price that the profitably built for and competitively sold for, they would also do that.

Thermodynamic efficiency should usually not be the primary design goal of new Stirling engine designs if anyone wants to sell it in a competitive marketplace.

Dollars Per Watt – The Ideal Figure of Merit

People never make decisions about any technology without having other options they can choose from.

When people are considering buying a Stirling engine, they will always compare it to some other power producing option.

The point is, there is always a comparison between Stirling engines and something else in the customer’s minds. The initial purchase price of the technology is often the most important consideration in these kind of decisions.

What The Engineering Goals Should Be 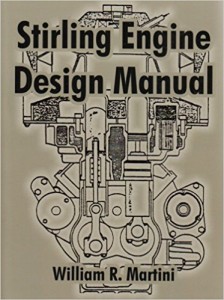 Engineers developing new Stirling engines should pay very close attention to how much the customers they hope to sell to will pay per watt of power.

Things like shipping and installation cost and everything down to the cost of the box all matter and should be considered at the very first stages of a new engine development.

I started this website, www.stirlingengine.com, in 1998 and I had been interested in Stirling engines for a couple of years before that.

From then to now, I’ve seen many government-funded research projects fail to produce products that could be sold at profit to the public. The failure rate is almost 100%.

This has happened so often that I have come to expect it.

Cool research projects make exciting headlines, interesting prototypes and reports, but they don’t produce products that anybody will ever buy.

One of the reasons why most Stirling engine research hasn’t resulted in products you can buy is because a lot of research was done to try to match Stirling engines to applications that they weren’t well suited for. 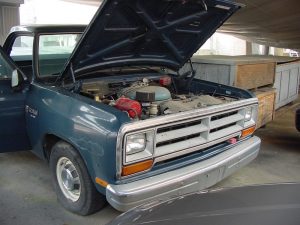 NASA funded projects to put Stirling engines in cars, like this Dodge D-150.

There was a big government-funded research project to put Stirling engines in cars.

So, it never was a good match between the technology and the application.

Stirling engines have often been developed by technology enthusiasts who are engineers.

But, in the life cycle of any product, there comes a time when you need to stop engineering and start selling. 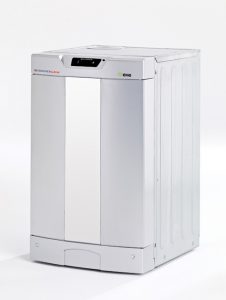 A combined heat and power unit, made by Whispergen.

Naturally, the engineers are not usually suited for this so they often look for a way out.

The common mistake in strategy is to turn the marketing over to another company that isn’t passionate about the product.

How can I market my Stirling engine in cooperation with a big utility or something like that?

This was the marketing strategy that resulted in the 2012 failure of the New Zealand based company WhisperGen. They turned the marketing to a big company that didn’t care and, not surprisingly, the project failed.

As I write this, Dean Kamen’s Company DEKA research is following the same strategy that is likely to fail with it’s excellent combined heat and power Stirling engine.

Generators You Can Buy

Below is a list of all the power producing engine projects we could find in the market place as at this writing.

I’m not recommending any of these companies. I’m merely saying these are the ones that we could find.

If you do your due diligence, perhaps one of them may have a product that’s right for you.

One of the best applications of Stirling engines is to make electricity while also capturing the waste heat and using that to heat water.

This can be done for domestic use or for a commercial application such as a laundromat.

When both the electricity and the hot water has a useful application, these machines can have a very high efficiency overall.

Check out our complete list of Combined Heat and Power Systems that are available for purchase on our recommended page. 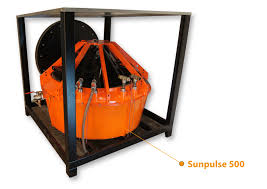 There’s one company that I know of has a low temperature difference Stirling engine for sale.

That is the Sun Orbit Company from Germany and their line of sun poles engines. The website is in German, but Google translate will help you if you don’t read German.

It would be rare for Stirling engines that have gone through an expensive development process and then be scrapped when the program is over.

Usually, they get put in storage for a long time until someone gets tired of storing them, and they finally get sold as government surplus.

These Old Prototypes Can be Found

So, starting with the development of the modern Stirling engine era, you should know that Phillips electronics, and many other companies, have developed quite a lot of Stirling engines over the years.

If you want to find one, you could possibly set up a custom search on eBay or a similar site that might eventually find you the Stirling engine generator you’re looking for.

The now-bankrupt WhisperGen of New Zealand made some Stirling engines for combined heating power.

Why Didn’t the Prototypes go to Market?

There have been many prototypes built over the years, most of which worked perfectly but were never brought to the market for reasons that have nothing to do with whether or not the technology worked.

Perhaps the style in granting research money changed and they didn’t get the next generation of grants. Or perhaps funding was no longer available.

Either way, this caused the project to shut down.

Usually, the prototypes weren’t thrown away. So, these engines exist and would be a better start for many new projects than a blank sheet of paper.

One of the wonderful things about the United Kingdom is there’s a great tolerance of eccentricity and enough people have the talent and money to do interesting things like building a Stirling engine to power a boat.

The boats we’re talking about are slow canoes and skiffs that do well in very calm rivers and lakes.

Norris Bomford at the helm of his boat, running on a Stirling engine.

They tend to be the same kinds of boats that can be powered by oars, but there are boat hobbyists in the UK who have built Stirling engines.

And, they are likely to be very generous with assisting a new hobbyist in starting to build a new engine that could work.

If you have enough money and would like to hire a company to research a Stirling engine for you and develop another prototype, you are in luck.

There are companies who have been in the business of doing research and selling prototypes for a very long time.

Most notable is Sun Power of Athens, Ohio.

If you do hire a company to do the work for you, then you’ll need to give them strict instructions about the figures of merit you want to use to evaluate the project.

Remember, it’s important to consider the price manufacturing and the full delivery cost to the customer.

Is it an engine that can be manufactured and sold profitably at a price that people are willing to pay?

If you have any questions or if you’ve found other sources of Stirling engine generators, please leave them in the comments below.