An animation of the world’s first low-temperature difference Stirling Engine. Built by Ivo Kolin in 1983.

Engines that can run on warm water, or ice cubs, can be difficult to understand.

What is a Low-Temperature Difference Stirling Engine?

Some have been made to run on less than 1 degree C¹.

Summary of This Article

In the article below, I’ll give you the history of these engines. I’ll also explain in detail how they work and why they are sometimes pressurized.

This article will cover their power producing uses today and show a video of a power producing 1500 watt low-temperature difference engine that you probably have missed.

You will learn what your main design focus should be if you decide to design one there are some bonus “how to build one” tips that you may enjoy. 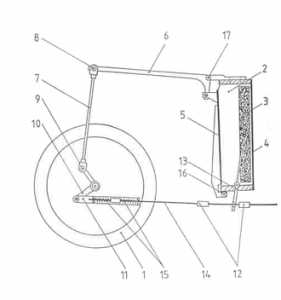 A drawing of one of Ivo Kolin’s first Low Temperature Difference engines.

In 1983, Ivo Kolin, a professor of Engineering at the University of Zagreb n Croatia, built the first low-temperature difference Stirling engine that would run on a heat source cooler than the temperature of boiling water¹.

It ran on a 15 degree C temperature difference and is the engine represented by the animation at the top of this page.

It was a remarkable and important invention because it was the first time in world history that someone had built an engine that would run on a heat source cooler than boiling water.

Innovations as fundamental as Professor Kolin’s are rare.

In 1984, Croatia was part of Eastern Europe that was dominated by the Soviet Union. There was no way for Dr. Kolin to become an entrepreneur and sell his engines even if he wanted to.

What was possible for Dr. Kolin was to publish his findings in Engineering journals in both Russian and English.

Unfortunately, few people learned about his invention outside of the engineering journals he published it in. 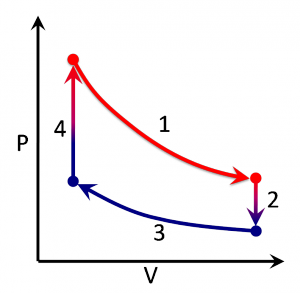 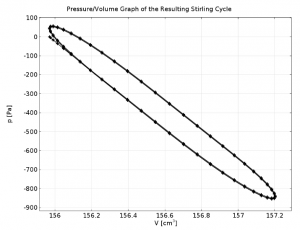 Academic journals are written for academic readers. Fortunately, one of those academic readers was a professor of physics at the University of Wisconsin, River Falls, Dr. James Senft.

Dr. Senft understood that Dr. Kolin’s invention was important and he set out to improve and simplify Kolin’s engine.

But Senft had access to better tools than Kolin did.

Senft had a machine shop and he knew how to run a lathe. Kolin built his engines on his kitchen table using only basic hand tools.

If you look at the animation of Dr. Kolin’s first engine at the top of this page, you will notice that the displacer (which is green in this animation) stops and rests at the left and right extremes of its travel.

This was and still is a way of making the engine more thermodynamically efficient.

An engine with a displacer that dwells at it’s extremes of travel (using a mechanism like this or perhaps using cams) will have a thermodynamic cycle more like the ideal cycle with almost sharp corners.

That’s important to understand, but it may not matter in a practical engine design.

Dr. Senft realized that mechanical efficiency was just as important as thermodynamic efficiency¹.

Dr. Senft simplified the engines he built by making the following improvements. 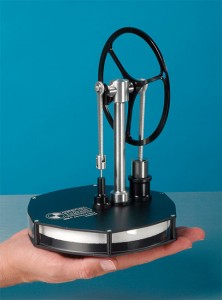 Dr. James Senft designed the first low-temperature difference engines that looked like this.

It was an engine very similar to this one.

Do You Want to Build Your Own?

If you are interested in building a simplified version of this engine, please click on the following link and then scroll to the bottom of the page —  Coffee Cup Stirling Engines.

When you see a Stirling engine running on hot water at least it looks like hot water could be a fuel, especially if the water is too hot to put your finger in it.

But Stirling engines can even be made to run on water that just the heat from your warm hands.

All Stirling Engines Work in the Same Way 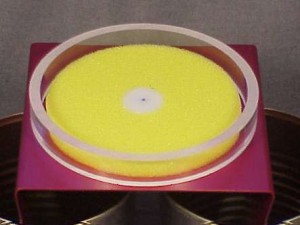 This image shows the gap between a foam displacer and the edge of a LTD engine.

They work by alternately expanding and contracting a gas (usually air) and saving some heat from one cycle to the next in something that functions as a regenerator.

Stirling engines don’t have to have a part inside them labeled “regenerator” to still have something that works in the same way.

With the right engine, anything from a warm hand to a warm baby’s butt can serve as the heat source as long as the cold side of the engine is just a little bit colder.

It is possible to build low-temperature difference Stirling engines that will produce some power.

These engines are fairly large for the amount of power they put out, but when you pause to remember that the fuel is a free heat source, large engines can ge a good choice for some applications.

The Ecoboy 100 Watt Engine made in Japan was designed to be a power producing engine.

It is approximately 1 meter in diameter and puts out about 100 watts.

Like the Ecoboy, they tend to be fairly large for the amount of power they put out, but for the right applications and with the right free fuel source, they can be practical, too.

This should be safe as long as the engine is not lubricated with oil anywhere inside the engine.

The Best Figure of Merit

One of the biggest problems with Stirling engines designed in the past is that engineers focused on getting efficiency.

They built them with intention of producing the maximum thermodynamic efficiency.

This doesn’t make sense when the fuel is free, such as running on solar or geothermal heat sources.

Stirling engines should be designed to have a low cost per watt when the engine is delivered to the customer and doing what the customer wants done.

The cost per watt is what the customer values.

Making a Stirling engine have 5% more thermodynamic efficiency can very easily double the purchase price of the engine.

I Highly Recommend Building Your Own

If you decide to build your own low-temperature difference Stirling engine you probably will be glad that you did.

It’s a lot of fun to see an engine you built run for the first time and you will get a much better feel for how Stirling engines work.

After you build one engine, you will naturally want to try to improve your next engine.

But, you’ll find that some things you thought were improvements actually make the engine run worse or not at all.

The proper rules for Stirling engine design are not immediately obvious.

They’re ratios. And when you change one feature of the engine, other features will have to change to take appropriate advantage of the new improvement.

For example, any improvement you make in either heating or cooling will require an adjustment in the compresion ratio of the engine to take advantage of your improvement.

The First Time I Saw a Low-Temperature Difference Engine Running

I Couldn’t Understand It

The room was about 80 degrees F (26 degrees C) and there wasn’t any fuel source that was obvious to me.

This was before I had taken my first physics class.

How Can an Engine Run on Ice?

Now, I know that Stirling engines don’t really run on ice. It’s impossible to make one that runs on ice.

But, they can certainly be made to look like they’re running on ice.

Engines That are Cold on Both Sides Won’t Run

When a Stirling engine appears to be running on ice, it’s actually using the temperature of the room as its heat source and using ice as its heat sink.

If both sides of the Stirling engine were at the same temperature (any temperature whether hot or cold), it wouldn’t run.

It’s difficult to fully understand this concept if you haven’t held one in your hands.

If you liked this article, please take the time to comment below.

Feel free to link to any low-temperature difference Stirling engines that you’re particularly fond of.

Perhaps we can include your suggestions in the next revision of this page.

Comments are moderated so it may take us a while for your comment to appear, but we will get it online.